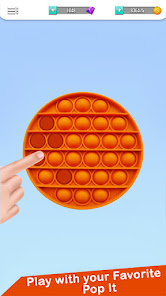 The Feature of Pop it: Puppet Antistress Game: