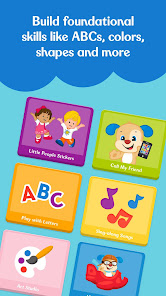 The Feature of Learn & Play by Fisher-Price: