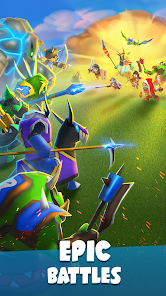 The Feature of Age Of Legends: Idle Wars: