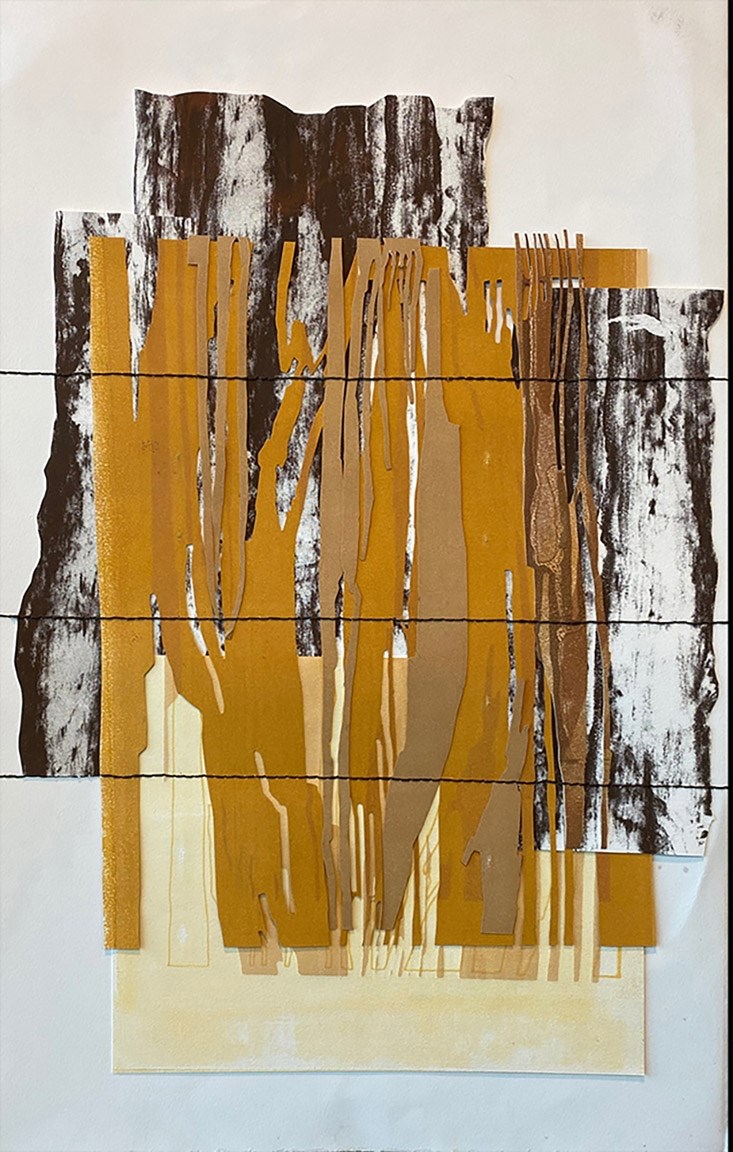 ‘Bark and Grain’ (collage of monoprints and screenprint with hand-stitching, 2019) was one among two artistic endeavors by structure professor Laura Terry chosen for this 12 months’s 64 Arts Nationwide Juried Exhibition.

FAYETTEVILLE, Ark. – Two artistic endeavors by Laura Terry, a College of Arkansas structure professor, had been chosen for inclusion on this 12 months’s 64 Arts Nationwide Juried Exhibition.

Terry’s works, “Bark and Grain” and “A E-book of Maps,” are a part of this 12th annual exhibition, on show by way of Oct. 9 at Buchanan Middle for the Arts in Monmouth, Illinois.

Terry, an affiliate professor within the Fay Jones College of Structure and Design, teaches the first-year structure studio, in addition to skilled electives in printmaking, portray and guide binding. She additionally contributed to a video about making a sketchbook as a part of the FAY Design Digital Schooling collection this summer time.

The 64 Arts Nationwide Juried Exhibition showcases high quality visible art work from artists throughout the US and promotes the significance of the humanities within the Warren County neighborhood and surrounding area. An digital tour of this 12 months’s exhibition will be discovered on the Buchanan Middle for the Arts web site.

The juror for this 12 months’s exhibition was Samantha Grassi, an exhibition designer, artist and culture-consumer initially from New York. Grassi at present designs exhibitions on the Artwork Institute of Chicago. She creates architectural areas and distinctive shows that inform tales, talk concepts, and — most significantly — spotlight artwork.

Although Terry hasn’t entered this exhibition earlier than, she mentioned, “I simply occurred to have work accessible, so the timing was proper. However I did analysis the juror, Samantha Grassi, and I believed her curiosity in exhibition design may overlap with the structured elements of my work, however there’s by no means a assure which works a juror will select. The juror has the distinctive place of seeing all the work that’s submitted after which crafting an exhibition that celebrates the total spectrum of the media.”

Terry mentioned that being chosen for a nationwide juried exhibition with a good juror is validation for the work, plain and easy.

“It is good to have work exhibited in numerous places across the nation and to be part of an exhibit that brings totally different artists from totally different backgrounds collectively in a single place,” she mentioned. “Having two items within the present was particularly vital for me.”

Terry created “A E-book of Maps” as a part of work she produced at a one-week intensive printmaking workshop in summer time 2017 at Anderson Ranch Arts Middle in Colorado. The piece is a collage of monoprints, graphite drawings and hand-stitching.

“We discovered the best way to use stencils to create monoprints that had been intently associated however not actual duplicates,” she mentioned. “I interchanged the stencils to create layers within the prints, and in the long run, I interpreted these layers as ‘strata’ that referenced geological layers of the earth.”

The piece was additionally a part of an early 2018 solo exhibition of her work offered in Vol Walker Corridor on campus.

“Bark and Grain” was created in an analogous approach, although she used the stencils themselves, layered with a screenprint created from a frottage — or charcoal rubbing — of a pine tree.

“This new work is investigating the pine forests of southern Arkansas as a part of my ‘Forest Portraits’ collection,” she mentioned. “Each items are collages of prints which might be hand-stitched collectively. The stitching is paying homage to my love of quilts and the bodily approach through which supplies are connected.”

“A E-book of Maps” has now been in three nationwide juried reveals, together with the 61st Annual Delta Exhibition and “Ink & Clay 44,” each in 2019.

“It’s nice that the piece has been acknowledged by three totally different jurors in three very totally different components of the nation,” Terry mentioned. “‘Bark and Grain’ is a brand new piece, and so it’s thrilling that it’s already being acknowledged, and it makes me excited to proceed the work for my ‘Forest Portraits’ collection.”